A month ago we bought a sheep-shaped soft pillow that caused a lot of excitement in our cat group. It is funny with cats. Sometimes you buy them a toy you are certain they will love, but they do not care about it all. At other times, some, in your eyes, very boring thing becomes an immediate hit. We thought they might like the sheep, but we did not expect that it will be so popular. (We bought the sheep in Chilli, they have a store close to where we live).

Maven was the first to hug, pet and take care of her sheep friend. She would clean herself, walk all over the sheep, put it in the right shape and then sleep on it or beside it.

But, then, Leroy also liked the sheep. He was jealous of Maven and stole the sheep whenever he could. 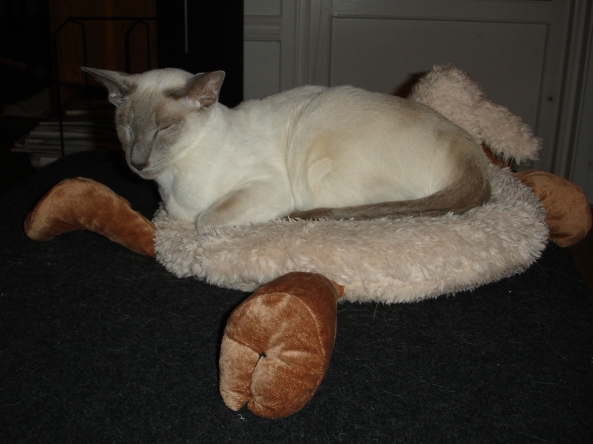 Then the other cats wanted the sheep as well.

After a few weeks of occasional quarreling about the sheep, we went and bought them 3 more sheep! One in beige color as the first one, and two white ones.  Of course, NO ONE wanted any sheep when there were so many around, but after a few days, everyone loves sheep again.

Siamese and the white sheep